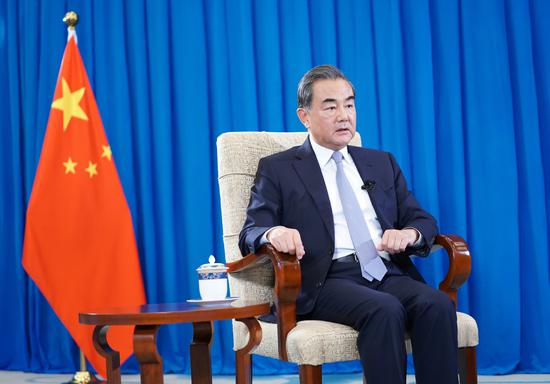 China will give the Philippines a shipment of COVID-19 vaccines to help it tackle the pandemic and will guide enterprises in vaccine procurement cooperation with the Philippines, State Councilor and Foreign Minister Wang Yi said during his visit to the country on the last leg of his four-nation Southeast Asia tour, which ended over the weekend.

The Philippines is a good friend and brother of China; Beijing fully supports Manila in the fight against the virus, and unity and cooperation are the most powerful weapons against the pandemic, Wang told Philippine President Rodrigo Duterte in a meeting in Manila on Saturday.

Duterte said the Philippines is grateful for China's strong support－especially the timely vaccine offer－to his country in the virus fight, and Manila looks forward to increased vaccine cooperation with China.

During the visit, the two countries jointly announced the launch of a two-way "fast track" to facilitate necessary and safe travel between the them amid the pandemic.

In the first 11 months of last year, commodity trade with China accounted for more than 20 percent of all of the Philippines' foreign trade, according to Chinese Ambassador to the Philippines Huang Xilian.

Bilateral cooperation on major projects has yielded good results, with the two countries having completed 11 projects. Twelve further projects are now in progress or about to begin, and another 12 projects are being negotiated.

In a separate meeting with Philippine Secretary of Foreign Affairs Teodoro Lopez Locsin on Saturday, Wang called on the two countries to speed up trade liberalization and facilitation, and to nurture new areas for growth, including cross-border e-commerce and finance.

Locsin said the closeness between the two countries is epitomized by their lasting progress in the economy, trade and infrastructure, as guided by the two heads-of-state, to overcome the pandemic.

The goal is to make the set of rules substantive and effective, align the code with international law and show to the world that regional countries have the ability and wisdom to jointly solve the region's existing issues, Wang added.

Also on Saturday, Wang and former Philippine president Gloria Macapagal Arroyo jointly witnessed the launch of the Manila Forum for China-Philippines Relations and the Award for Promoting Philippines-China Understanding.

Most popular in 24h